Skip to content
Huffman coding algorithm was invented by David Huffman in 1952. It is an algorithm which works with integer length codes. A Huffman tree represents Huffman codes for the character that might appear in a text file. Unlike to ASCII or Unicode, Huffman code uses different number of bits to encode letters. If the number of occurrence of any character is more, we use fewer numbers of bits. Huffman coding is a method for the construction of minimum redundancy codes.
Also Read: Kruskal’s Algorithm for Finding Minimum Cost Spanning Tree
Huffman tree can be achieved by using compression technique. Data compression have lot of advantages such as it minimizes cost, time, bandwidth, storage space for transmitting data from one place to another.
In regular text file each character would take up 1 byte (8 bits) i.e. there are 16 characters (including white spaces and punctuations) which normally take up 16 bytes. In the ASCII code there are 256 characters and this leads to the use of 8 bits to represent each character but in any test file we do not have use all 256 characters. For example, in any English language text, generally the character ‘e’ appears more than the character ‘z’. To achieve compression, we can often use a shorter bit string to represent more frequently occurring characters. We do not have to represent all 256 characters, unless they all appear in the document. The data encoding schemes broadly categorized
in two categories.

Fixed length encoding scheme compresses our data by packing it into the minimum number of bits i.e. needed to represent all possible values of our data. The fixed length code can store maximum 224,000 bits data.

In variable length encoding scheme we map source symbol to variable number of bits. It allows source to be compressed and decompressed with zero error.

A greedy algorithm constructs an optimal prefix code called Huffman code. The algorithm builds the tree T corresponding to the optimal code in a bottom-up manner. It begins with a set of |C| leaves (C is the number of
characters) and perform |C| – 1 ‘merging’ operations to create the final tree. In the Huffman algorithm ‘n’ denotes the number of set of characters, z denotes the parent node and x & y are the left & right child of z respectively.
Also Read: Dijkstra Algorithm for Finding Shortest Path of a Graph
Huffman (C)
1. n=|C|
2. Q=C
3. for i=1 to n-1
4. do
5. z=allocate_Node()
6. x=left[z]=Extract_Min(Q)
7. y=right[z]=Extract_Min(Q)
8. f[z]=f[x]+f[y]
9. Insert(Q,z)
10. return Extract_Min(Q)

The Q is initialized as a priority queue with the character C.
Q=C can be performed by using Build_Heap in O(n) time.
For loop takes (|n|-1) times because each heap operation requires O(log n) time.
Hence the total running time of Huffman code on the set of n characters is O(n log n).

The following general procedure is applied for construction a Huffman tree:
Search for the two nodes having the lowest frequency, which are not yet assigned to a parent node.
Couple these nodes together to a new interior node.
Add both the frequencies and assign this value to the new interior node.
The procedure has to be repeated until all nodes are combined together in a root node.

Construct a Huffman tree by using these nodes.
Solution:
Step 1: According to the Huffman coding we arrange all the elements (values) in ascending order of the frequencies.
Step 2: Insert first two elements which have smaller frequency. 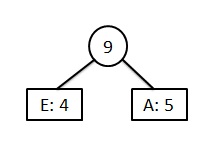 Step 3: Taking next smaller number and insert it at correct place. 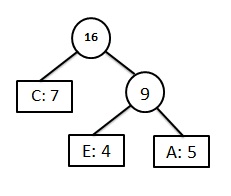 Step 4: Next elements are F and D so we construct another subtree for F and D.

Step 5: Taking next value having smaller frequency then add it with CEA and insert it at correct place. 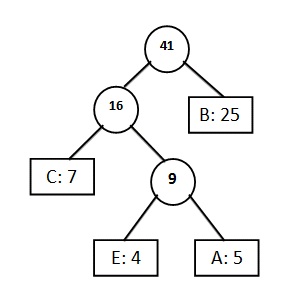 Step 6: We have only two values hence we can combined by adding them. 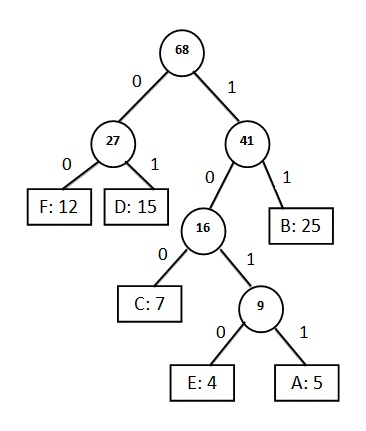 Huffman Tree
Now the list contains only one element i.e. FDCEAB having frequency 68 and this element (value) becomes the root of the Huffman tree.
If you found anything missing or incorrect in above huffman coding tutorial then please mention it by commenting below.