Skip to content
We can print the source code of a program as an output using
quine. So first lets understand what quine is?

What is a Quine?

A quine is a computer program which takes no input and
produces a copy of its own source code as its only output. The standard terms
for these programs in the computability theory and computer science literature
are “self-replicating programs”, “self-reproducing
programs”, and “self-copying programs”.
Also Read: List of Biggest and Popular Programming Contests
Also Read: How to Swap Two Numbers Without Using Temporary Variable or Arithmetic Operators?
Quines are named after the American mathematician and
logician Willard Van Orman Quine (1908–2000). The interesting thing about quine
is that we are not allowed to use open and then print file of the program.
An example of a quine in C language is given below which
produces the source code as an output. It can be written in any other language
like java, python, etc.
main(a){printf(a=”main(a){printf(a=%c%s%c,34,a,34);}”,34,a,34);}
If you will compile and run above code then it will show
following output 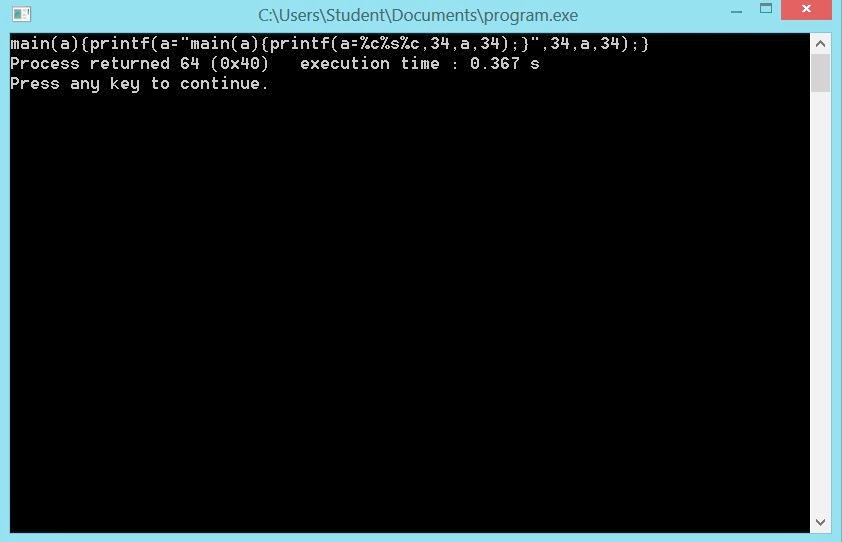 This program can result in undefined behavior as we have
used printf function without including its header file. Also, the return type
declaration for main has been left off to reduce the length of the program. Two
34s are used to print double quotes around the string s.
Source: http://www.geeksforgeeks.org/quine-a-self-reproducing-program/
and http://en.wikipedia.org/wiki/Quine_(computing)