Skip to content
Till now we have learnt about the while loop. We have also seen some common errors made by beginners while write loop control structure. If you see some big complex program then you will notice that program mainly contains only for loop. Now an obvious question which may hit your mind.

Why for loops are used more frequently than while loops?

Well the answer of this question resides in its syntax. For loop is generally used to implement a loop control structure, when programmer knows how many times he wants to execute a set of statements. Well it is not compulsory to use for loop in only those conditions. You can implement it anytime.

General Syntax of for loop in C is given below.


As you can see the syntax of for loop is quite compact. While using for loop, one doesn’t want have to write the loop counter explicitly.

So for loop is divided into three parts.

Truly speaking these 3 parts can replaced with any valid expression. It means we can also use functions like scanf() and printf() in spite of these 3 parts. We will learn about it in the next tutorial.

Anyways let’s try to understand this loop with one example. 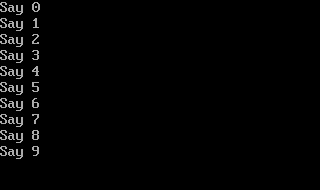 Lets try to understand this program.

The program is quite easy to understand. In the beginning I have declared x variable as int. After that I have started for loop with 3 arguments (like in syntax). After that I have written printf() function. As I want to execute only one function after for keyword, that’s why I dropped the braces too.

As I have said earlier for loops are used more widely than while loops. Its just due to its compact syntax. It is very important to understand the execution of for loop to write good programs using it.

For practice of this loop you can try below program.

Write a program to print your name 10 times. Try to analyse the execution of program by giving different conditions.