Text manipulation is one of the most frequently used function in any language. In the last program I have printed the string elements by accessing them one by one. However in serious programing it is very difficult to run loops when you have to print some string of characters on screen. To overcome this problem Dennis Ritchie introduced %s format specifier. It turns out to be very handy while printing the string on the go. Lets make one program to understand it.

Above program is self explanatory. I have only used %s format specifier to print the name string.

So far I told you about printing the output on the screen. However taking input from the user to a string is equally important too. To perform this task, first answer that will hit your mind is scanf() function. Yes scanf() can be used to take the input. But it is not perfect for this task. Lets understand it with one program 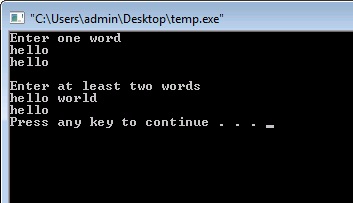 gets() function in C

This function is used to take the input from the user to the string. It overcomes the problem of storing only single word. With the usage of this function user can store any number of words or even sentences. Lets understand it with one program. 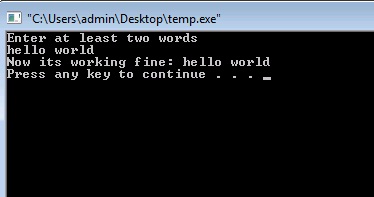 In the above program I have replaced scanf() function with gets function. As you can see now everything is working fine.