Skip to content
In this article I am listing out the most common errors and mistakes that programmers do. These must be kept in mind while writing the code.
Also Read: 8 Best Rules for Good Programming Style 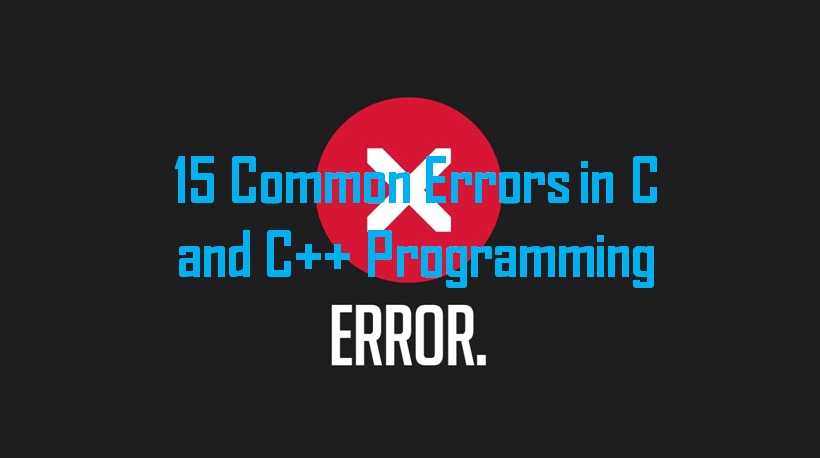 Every statement must end with a semicolon. A missing semicolon may cause considerable confusion to the compiler and result in misleading error messages. Consider the following statements.
a = x+y
b = m/n;
The compiler will treat the second line as a part of the first one and treat b as a variable name.

Another common mistake is to put a semicolon in a wrong place. Consider the following code:
for(i =1; i<=10; i++);
sum = sum + i;
The code is supposed to sum all the integers from 1 to 10. But what actually happens is that only the last value of i is added to the sum.

It is common to forget a closing brace when coding a deeply nested loop. The number of opening braces should match with the closing ones. However, if we put a matching brace in a wrong place, the compiler won’t notice the mistake and the program will produce unexpected result. Consider following example:
for(i=1;i<=10;i++)
sum1=sum1+i;
sum2=sum2+i*i;
printf(“%d%dn”,sum1,sum2);
In this code the for loop treat only the first statement sum1=sum1+i; as its body and therefore the statement sum2=sum2+i*i; is evaluated only once when the loop is exited. The correct code is:
for(i=1;i<=10;i++)
{
sum1=sum1+i;
sum2=sum2+i*i;
}
printf(“%d%dn”,sum1,sum2);

Every variable must be declared for its type, before it is used. During the development of a large program, it is quite possible to use a variable to hold intermediate results and to forget to declare it.
Also Read: 5 Tips to Become a Better Programmer

Forgetting the Precedence of Operators

Expressions are evaluated according to the precedence of operators. It is common among beginners to forget this. Consider the statement:
if(value = product() >= 100)
tax=0.05*value;
The call product() returns the product of two numbers, which is compared to 100. If it is equal to or greater than 100, the relational test is true and 1 is assigned to value, otherwise 0 is assigned. In either case, the only values value can take is 1 or 0. This is not we actually want.
The statement was actually expected to assign the value returned by product() to value and then compare value with 100. If value was equal to or greater than 100, tax is computed.
The error is due to the higher precedence of the relational operator compared to the assignment operator. We can force the assignment to occur first by using parentheses as follows:
if((value = product()) >= 100)
tax=0.05*value;

Mismatching of Actual and Formal Parameter Type in Function
Calls

When a function with parameters is called, we should ensure that the type of values passed, match with the type expected by the called function. Otherwise, erroneous results may occur. If necessary, we may use the type cast to change the type locally.
Example: y = cos((double) x);

All non-pointer variables in a scanf call should be preceded by an & operator. If the variable code an integer, then the statement scanf(“%d”, code); is wrong. The correct one is scanf(“%d”, &code); Remember that the compiler will not detect the error and you may get a crazy output.

Crossing the Bounds of an Array

Forgetting a Space for Null character in as String

All character arrays are terminated with a null character and therefore their size should be declared to hold one character more than the actual string size.
Also Read: Hello World Program in Eight Different Popular Programming Languages

Another common error is to forget to use the operators * and & in certain places. Consider the following program:
main()
{              int m,*p1;
m=25;
p1=m;
printf(“%dn”,*p1);
}
This will print some unknown value because the pointer assignment p1=m; is wrong. It should be p1=&m;
Consider the following expression: y=p1+10;
Perhaps, y was expected to be assigned the value at location p1 plus 10. But it does not happen. y will contain some unknown address value. The above expression should be rewritten as: y=*p1+10;

Some other mistakes that we commonly make are:

Source: Programming In ANSI C By E BalagurusamyPlease share, if this article is useful for you!

6 thoughts on “15 Common Errors in C and C++ Programming”