Flutter is already found in headlines of mobile app development industry. The popularity waves are no surprise as top known companies like Alibaba, Google Ads, App Tree, Birch Finance and many more has already adopted Flutter. May be chances are you already have used the app of Alibaba, Google Ads which is developed by Flutter.

The product was in beta stage for long time and recently on Dec 4th 2018, Google released its first version 1.0. We have already acknowledged the excitement to know about this new transformative technology, so here’s a brief overview.

It is a complete SDK – Software Development Kit that has each and every thing you require to develop native Android and iOS apps or cross platform applications. The kit includes ready-made widgets, testing and integration APIs, rendering engine, command-line tools.

Flutter works on the reactive development architecture, but with few changes. Updating UI contents automatically at the time of updating variables in the code is one of the essential parameter about reactive programming. React Native platform works on the same rule, but it takes help of JavaScript Bridge in order to access OEM widgets. However the app faces obstacles when the app has to pass the bridge access widgets every time the app loads. Due to this functionality, it causes performance issue.

If the app needs to access OEM widgets, it has to be passed to the UI section, and it draws to the canvas while handling other events. In endeavor of creating cross-app platform app, the application uses JavaScript. So, when app wants to access UI i.e. OEM Widgets, it needs to get translated into an underlying framework – JavaScript Bridge, which then has to talk to OEM UI. This one added step of bridge needs resources and time and therefore reducing performance.

The Cross-Platform Approach Of Working The real cross platform approach need to send their code to SDK libraries and that access OEM widgets. Now with Flutter, the bridge is removed and it communicates with platform by using Dart.

Checking out details about Dart? Flutter uses object-oriented language known as Dart that uses ahead-o-time compilation methods in order to compile into native code without the bridge access widgets. Due to this, app startup line is easily loaded and this boosting the speed of app load.

As shown in above picture, Flutters uses its OS as a canvas directly in order to develop the interface. Therefore, the different services like gestures, animations, rendering are directly accessed into the framework and this provides ease of control to developers.

Since we have already understand what flutter is and how it makes the development process easy, let’s check out some of its best features.

Today, mobile app developers are searching for an app development platform that allows them to code less and work fast without glitches. Two such technologies that make Native app development easy are React Native and Flutter. React Native developed in JavaScript has already gained major popularity for developing Android and iOS application. While, the recently released Flutter that is majorly promoted by Google surprises us with its outstanding features.

What happens when we compare these champions? Let’s see. How To Get Started With Flutter?

We can use any text editor to write and build apps but recommended approach is android studio, VS code or Intelli J.

Here we will explain about how to install in android studio based on Linux OS: – There are basically 2 ways to install SDK. They are. 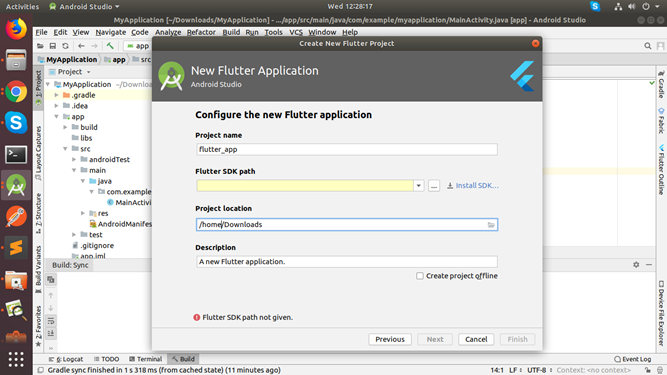 Now, give a path where you extracted the SDK. Click on next button and its done.

Can install directly from the https://flutter.dev/docs/get-started/install/linux  and follow the steps as given in the document.

Now we can start writing with flutter app.

How to Code With Flutter?

We have explained how you can develop a login page. Just note that, app works only in portrait mode, and below are the code snippets. Enter name TextFormField need to check as below:

Comment down below if you have any queries related to above article.

Atman Rathod is the Co-founder at CMARIX TechnoLabs Pvt. Ltd., a leading web and mobile app development company with 13+ years of experience. He loves to write about technology, startups, entrepreneurship and business. His creative abilities, academic track record and leadership skills made him one of the key industry influencers as well.