Believe it or not, there
are a lot of sides to Green IT. This is mainly because there are lots of sides
to computing and IT in general. This article is not a massive essay and so
cannot cover all the elements of green IT, but it covers a few of them.

Also Read: How to Deep Clean Computer Mouse and
Keyboard?

This is one for the most
obvious forms of green IT. The Internet and home computers allow people to
telecommute. The good thing is that there are a lot of jobs you can do at home
if you would naturally otherwise work on a computer at the office. Instead of
commuting into the office, you can do your work from home. This saves on
energy, gas, traffic jams, etc, all of which makes this form of computing very
green. Even if a job may not be done every day from home, at least a few days
per month could be shaved off and done at home.

A fast graphic processor
(video card) is the largest power drain on most office and home computers. It
takes up more energy than the CPU(s) on the computer and other energy using devices. This means that you can
create an energy efficient way of working with your GPU. For starters, you could
use computers without a GPU or use shared terminals or desktop sharing
programs. You can select a GPU based on its performance per watt to be sure you
are getting the most energy efficient one, including its low idle power and
average wattage. You can use your motherboard video output with uses less power
because it is a more basic form of 3D display.

The stuff that your IT is
made up of is often very toxic. It has things such as lead, hexavalent chromium
and mercury which are very nasty when put into landfills. Some parts of your
computer can be reused and repurposed if they are sent to the correct recycling
places. Sadly, most technology is thrown away or wasted.
There is often very little that can be used when recycling a computer, and most
waste (over 80%) is sent over the China or Pakistan where landfill laws do not
exist. 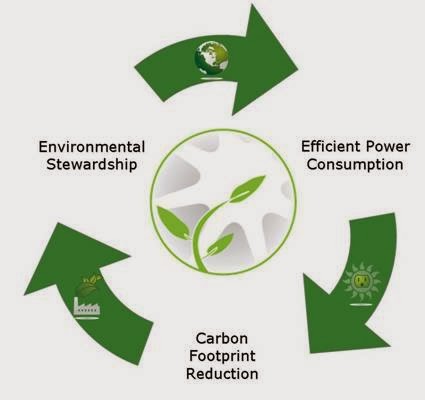 Also Read: Some Unknown Windows Tricks that I Mostly
Use to Make my Work Easier

Your operating system
takes up power too

The storage on your
computer

This is a difficult one,
because smaller hard drives will take up less energy per GB than larger hard
drives. Flash drives are more energy efficient, but they are not really much
use inside of PCs and laptops as they are still not reliable enough to power
such sophisticated devices. On the other hand, having 100 GB on your computer
instead of 200 GB is not going to make much difference. Sadly, it is a problem
that is faced more by big data centers that have lots of servers running at one
time. The company behind MySpace made a recent breakthrough to help them save
power, but their small triumph is not going to solve many world energy
problems, just smaller server problems.

Also Read: Using a VPN Service – How to Hide Yourself
Online

The problem with this
question is that is has no definitive answer. We cannot yet say if using one
big cloud network instead of having hard drives at home will help to save
energy, as the data centers are going to use up a lot of power. The only
argument for putting all of everybody’s data on the cloud is that if server
space was not being used then it could be turned off. This is not something
that people could do at home. For example, if you were not using 40 GB on your
computer, there is nothing you can turn off to save energy. Still, the fact
that data centers take up so much power (don’t forget the air conditioning too)
makes the decision on which is more green a very hard one.

The article was provided by
Sonia Jackson who writes for http://www.royal-essay.com. She answers all your questions about writing and
editing.